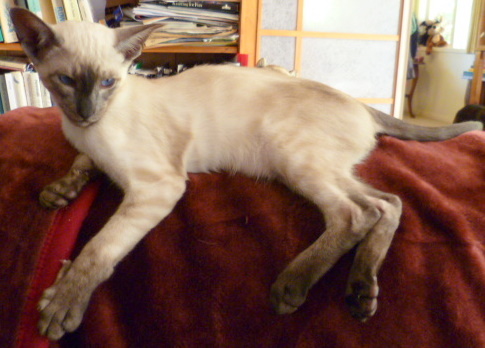 Carlie is our special needs kid. He is a seal smokepoint boy who is the only survivor from a premature delivery.

He sustained a small amout of damage in the event and has a few unusual quirks.

He LOVES water and even puts his front paws into his fresh water bowl, which obviously is no longer fresh! His favourite toy is a big bath towel stolen from the airing that he can tow around the house growling fiercely.

He is a great gatherer of fallen leaves and old potatoes as well as rubbish from heaven knows where, feathers and flowers.

He is an excellant guard when his person goes to the toilet. Sitting like a statue in the doorway with his back politely turned and daring anybody else to enter.

He is the best babysitter that I have ever had, even trying desperately to feed his little relations.